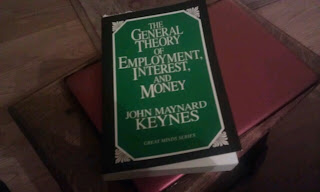 It was my fortieth birthday recently and I was glad to be presented with many books. Amongst them, courtesy of my father, were The Wealth of Nations by Adam Smith and The General Theory of Employment, Interest and Money by John Maynard Keynes. I decided to start reading the latter book first. This is the first in a series of posts in which I'll try and explain what I've got out of the experience.

First off, I'm not an economist by training, but the problems with economies around the world in recent years have kindled my interest, especially when I began to appreciate that so-called "Keynesian" solutions, as described by the likes of Paul Krugman, seemed to not only stand up to skeptical, rational scrutiny but also had a very solid basis in historical precedent. Before going further, the very first thing I learned is that Keynes is pronounced canes, not keens.

Not being an economist of the early 20th century makes reading Keynes's classic book a bit of a challenge. My first stumble was when I encountered the word "disutility". I tried and failed to understand it from the context and a search of the web kept leading back to extracts from the book itself. It turned out that "utility" is a term in economics used to quantify human satisfaction and that the word "disutility" was either peculiar to Keynes himself, or else is now arcane. The term appears in the context of Keynes disputing the received economist wisdom of his time that workers settle for a real-wage (i.e. in real terms, not in terms of an amount of money) that is just sufficient to make their employed state of greater utility (or lesser disutility) than their unemployed state. If you are struggling with that last sentence, then you have a sense of what it feels like to read Keynes's book.

The point is valid though. An employee will immediately seek redress with their employer if forced to take a pay cut, i.e. the money-wage is reduced, but may not even notice if the real-wage is reduced, say, because prices of everyday items have increased. Even if noticed, the employer is unlikely to see rebargaining the wage as their problem; they too may be faced with increased business costs due to increased prices. This situation is playing out just now across Europe: in Spain and Greece people are understandably furious at having to take money-wage cuts (or else be made unemployed) to solve economic problems that were not of their creation. Meanwhile, outside the land of the Euro, in Iceland, most people implicitly accepted real-wage cuts when the Icelandic currency was devalued.

The next piece of received wisdom at which Keynes takes aim is the notion that "Supply creates its own demand". That strikes me as immediately strange, but nevertheless there are still people who believe it today. One implication of it is that there should be no involuntary unemployment, on the basis that everyone who wishes to work can do, because when they produce something, there will be a demand from someone, somewhere to buy it. This seems so obviously absurd that you may wonder why it would need refuted, either in 1936 by Keynes, or by anyone today. Of course, the absurdity of it is not often as plainly stated as this, but it is implicit in much economic wrong-thinking. In fact, as Keynes sets out, if you believe in "supply creates its own demand" or one of many equivalent variants of that statement then you are actually adopting an economic model that assumes there is no real barrier to full employment. In boom times that might not be so bad a model, but during a depression, like the current one, it's simply the wrong model to adopt. To use an analogy: if a car fails to start, no amount of tinkering with the engine will help if you've incorrectly assumed that it has sufficient fuel in the tank.

But, that said, after only having read books I and II of Keynes' classic text, I have not yet encountered anything else that you would recognise as "Keynesian", e.g. that governments should spend their way out of a recession. Instead, Keynes has merely sketched his ideas in broad brush and then painstakingly set out a series of definitions of net income, investment, saving and something called "user cost" (akin to depreciation, except that no cost is incurred if equipment is idle) so that he can go on to describe his theory in subsequent books. In other words, he found the economic descriptions of his own time too vague and imprecise to formulate his theory and so invented his own.

I am not one who is prone to hero-worship and I certainly do not worship Keynes nor accept his ideas without question. But it is clear Keynes was a very intelligent person and, more importantly, an independent-minded individual. Don't take my word for it - have read (or listen) to what philospher John Gray had to say about him.
Posted by mcnalu at 21:37