Looking at the data, a more interesting analysis would be to take the births per thousand people and correlate that with the number of masts per thousand people in each area. My guess is that there might be a much weaker correlation, but it may still show some interesting effects. For example, is the birth rate higher in areas with greater population density in which more phone masts are erected? Is there more NIMBYism against phone masts in prosperous areas with lower housing density?

This housing phenomenon must be an age-old one and mobile phone masts are just a new proxy for it. I recently researched the history of the defunct mining village of Mavis Valley and in the 1901 census data (which, alas, isn't freely available on the web), I found that 49% of the village's population was under 15. At first I thought "wow, compare that with our aging population these days", but then I realised that the percentages for my own street - about 20 three and four bedroom houses built in 1995 - had a very similar percentage of under 15s. Sure enough, when I checked, I found that Mavis Valley had undergone a major expansion in the decade before the census and so young couples had moved into the new houses and started breeding.

A magnet for numerology and pseudo-science (i.e. nonsense) is the sunspot number time series, which I spent three years of my life studying. Your eye and brain might be attracted by the graph in this example:

But look more closely and critically and ask yourself these three questions:

Knowing how to ask those questions, and to think critically and as objectively as possible, and at the same time be aware of unavoidable subjective choices and influences, are skills that a good scientific training brings. This is the aspect of science that is almost always lost in the media and this is exactly why the article in today's Guardian delighted me.
Posted by mcnalu at 11:10 1 comment:

It's been a bit cold


Last winter was unusually cold and snowy in Glasgow, UK. Already this winter seems to be even colder.

In the last two weeks we had two significant snow falls and temperatures plummeted to -15oC, staying below -10oC for almost two days.

Many countries are used to this kind of weather, but this is quite exceptional in Glasgow and so no-one - authorities nor residents - knows quite how to handle it.

Have a look at this graph of temperatures from Glasgow airport:


(View the spreadsheet of data originally from wunderground.com.)

Glasgow is about 4 degrees north of Oxford in latitude and so it should show lower winter temperatures. In reality it doesn't because Glasgow benefits more from being on the receiving end of heat brought across the Atlantic by the Gulf Stream.

Apart from the obvious problems of clearing snow and ice, such low temperatures present completely new issues. At about -15oC diesel significantly thickens as the paraffin and other constituents of the fuel solidify. This blocks the fuel filter and causes the engine to lose power or fail to start, as happened in some parts of the country.

Salt also becomes less effective at preventing ice formation at lower temperatures and I saw that several major roads within the city that were certainly treated with grit (rock salt) were not free from ice. In fact, at about -21oC, no amount of salt can prevent water ice from forming.

The other issue that was seen during last year's winter and that is still evident a year on is the damage caused when water repeatedly freezes and thaws in cracks and cavities in the road. This happens because water expands when it freezes, which breaks concrete, rock, cement, asphalt and tarmac. The results are huge potholes and sunken manholes on almost every road.

I do tire of hearing people complain that our political leaders should have been better prepared under such extreme conditions. The resignation of Scotland's transport minister seemed to be more about poor media handling on his part, skillful (but ultimately pointless) attacks from the opposition and some bad luck in exactly when the snow fell (peak of rush hour on a Monday rush hour). Perhaps he did make some mistakes, but I can't tell what they were after reviewing the media coverage. On the upside, I'm no fan of this SNP government so if this speeds their exit, I will not complain.

But, all this raises the question: after two winters of unusually severe weather, should we (that is the government and individuals) now prepare for such eventiualities every winter? I'm starting to think so and I think I'll see if I can find some explanation for why our mild Scottish winter climate might be changing.
Posted by mcnalu at 16:43 1 comment:

(This post was meant to the be the first on this blog, but I accidentally published  the "wondering" one first.)

I'm not entirely sure what will appear in this blog, but it will probably be a variety of posts on subjects that have amused or interested me to the extent that I feel the need to express myself. Hmmm, that's just a definition of blog I suppose. Rest assured that future posts will be better than this one. My previous attempts at blogging, along with other stuff I've done, can be found at mcnalu.net.
Posted by mcnalu at 08:41 No comments: 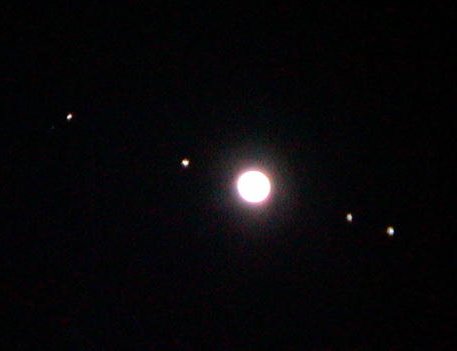 The night sky is beautiful to the naked eye, but it has an even deeper beauty that can only be appreciated with your mind.
Posted by mcnalu at 11:46 1 comment: