After waiting a couple of months, my raspberry pi finally arrived the other day. For those of you that don't know, it is a ludicrously cheap ($35 or £25) computer that is sold as a bare board with a few connectors on it. In contrast to the out-of-the-box shininess that is now the raging fashion, this wee beastie is minimal and challenges you to learn something about it, and about computers in general. In fact, that's exactly why the raspberry pi came into being.

The tiny thing on top of the standard PC case in this photo is my raspberry pi. There are only two cables plugged in here: the ethernet cable at the back and the power cable (standard USB phone charging cable) at the front. You can also just make out the SD card which is slotted in the same side as the power cable. This serves as its disk drive. 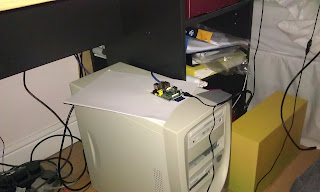 My first task after unboxing my new, little friend was to write the operating system to the SD card. This was simple enough, I downloaded the Debian linux image from the raspberry pi website, verified the file's integrity by its sha1 sum using this command

stuck the SD in my laptop (running slackware linux 13.37) and ran

(first checking that the SD card was /dev/sdb - much badness can occur if you get that wrong!). I then put the card in raspberry pi, plugged it into my TV using the HDMI cable, plugged in a USB wireless keyboard and mouse and then... drum roll... plugged it into the power and... more drum roll... some LEDs flashed but nothing appeared on the TV. It turned out that the TV had to be on and set to HDMI before I turned on the pi and once I did that... yet another drum roll... it worked! Text scrolled by and the little raspberry pi logo sat at the top left of the screen, looking cute and somehow content.

I was then able to start X windows with the LXDE desktop by issuing the command 'startx' and soon I had a giant logo emblazoned on my 32" TV. After some fiddling around loading the sound module I got the sound working and was able to listen to the short demo piece of music that comes with the music player. The software to get the pi's hardware doing its stuff is still in development and the sound is apparently quite buggy at present. My next task will probably be to get beta testing the next version of the Debian OS for the pi.

So, what am I going to do with it? I don't yet know exactly what I'll do with it, except probably what any child would do with a new toy: play with it.