Sometimes you notice a small thing that turns out to have much larger implications. So it happened last week. I noticed that the lines along the top of a spreadsheet seemed to bend, just slightly and only for a fraction of a second as I shifted my gaze - but I saw it. I thought at first it was some problem with my monitor, but when I saw it happen on another computer, I knew it was me and not the machine that was faulty. 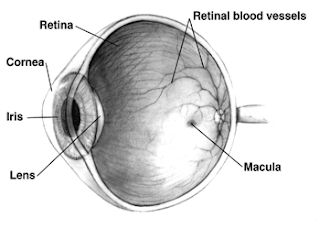 I am very short sighted and this results in the retina being stretched and made very thin and prone to spontaneous damage. The retina is the surface at the back of your eye that has many receptors that detect light. Each receptor feeds pulses to your optic nerve that allow the brain to construct an image that you see, well, that you think you see (it's a long story). It didn't take me long to realise that the retina in my left eye was faulty and I wasted no time in making an appointment at the optician. This was Friday.

On Saturday morning I saw the optometrist and she was extremely diligent and tested my eyes and photographed my retina but could find nothing wrong. She then arranged to have a 3D scan performed to see if the damage was below the retinal surface, but that too was inconclusive. We both agreed that whatever had happened to my eye, it was not deteriorating, so she arranged an  appointment at the hospital at 10am on Monday, but warned me to go to A&E if the condition changed over the weekend.

On Monday I spent the day having the same tests again and was given a thorough examination by a young doctor. She too was unable to identify the problem either by direct examination or from the results of any of the scans. She called in the consultant and he spotted a small hint on one of the scans and sent me off for a dye test. This test involves the injection of a yellow dye (fluoroscein) into the veins so that it will travel through your whole body; any disturbed or exposed blood vessels in the retina will give off a strong glow. I was warned that the dye would give me the appearance of a Homer Simpson, but it didn't give me more than a mild tan, though it did turn my urine a spectacular fluorescent yellow.

The dye-test showed the problem - I had a macular edema. The macula is the part of the eye that is most densely covered in receptors and it is what we rely on for detail in the centre of our vision. We rely on it for reading and perceiving fine detail in facial recognition. Edema means swelling - in my case a membrane at the back of my retina had ruptured causing liquid to enter an area just below the retinal surface. The consequence of this is that receptors in my eye have been re-arranged and possibly damaged.

The consultant explained all this to me and to be honest I was not at all alarmed. I already knew that my retina was damaged and, if anything, was reassured to have the details of it recognised and explained to me by an expert. I guessed that the damage was permanent but also guessed that, in time, my brain would be able to cope with this disruption, perhaps even learn the new locations of the remaining and undamaged receptors. The consultant confirmed this to me. He also assured me that there was a viable treatment that could prevent further deterioration, though this involved a series of injections into the eyeball and that the eye would need close attention for years to come.

For now, I need to live with a distortion in my left eye. In some circumstances, e.g. when outside or just looking around a room or driving, it is barely noticeable. At most I'll notice a brief kink in a window frame or a bend in a lamp post, but only fleetingly. If I use only my left (damaged) eye to read, then I can focus on a word with little distortion, but two or three words to the right do appear distorted, though legible. Using both eyes together is better, but I can feel the extra strain on my brain and eyes of having to reconcile two different images. But, in time, I'm sure my brain will rewire itself.

The distortion itself is always in the same place, a little to right and above my centre of vision. It is shaped like a flower and resembles five or so overlapping circles. Inside this shape my vision is distorted. I was pleased the other day that when I placed the Moon inside it (which was actually quite tricky) that I could still see it, although it was not round, nor could I see much in the way of features on it. The size of distortion is about half the area of my clenched fist held at arms length, so approximately 5 degrees across its longest part. If I close my eyes for a few seconds and then open them I can clearly see the outline of it, but just for a moment. If I blink rapidly I can see it as a blob, much like the blob left after you have viewed a bright object such as the Sun. Sometimes it reminds me of a poor Star Trek special effect, minus the Enterprise.

I can live with this level of distortion, but I do fear it deteriorating and spreading to cloud my entire vision in that eye. If, as is possible, a problem develops with my right eye then my visual acuity could deteriorate to the point where I can no longer read, but I won't go completely blind. Although the cause is different, the effects are not unlike the macular degeneration experienced in older people. I have to face up to the fact that significant loss of my eyesight is likely to occur as I age and that what some people face in their late seventies or eighties has started (just) before I reach 40.

This prospect is causing me some anxiety and I can feel a black cloud hovering behind me, dampening my ambitions and tempting me to retreat, dwell and introspect. To give into that leads to depression, so my aim is to reaffirm my ambitions and keep going regardless. I will take the treatment on offer, I will have faith that although my eyesight is failing, that it will do so in a stable way and that, at least for now, my brain can adapt. And, if things get so bad that brain cannot compensate then I will turn to computers and technology for help and rely more on my ears, for example by using audio books. But at the same time I must acknowledge this new limitation.

I feel fortunate that my interests are varied enough that the limitation will not dampen my enthusiasm for life. I am even more fortunate that I have a loving and supportive family around me and some very good friends. In fact, it has already occurred to me that limitation is not always a bad thing - I am prone to trying to do too much at once and so frustrate my ambitions in any one endeavour. Also, wherever I go, and wherever I look, I am now always accompanied by a colourful little amoeba-like flower when I blink, and, for reasons I don't quite understand myself, I actually feel some affection for the little thing.