My RPi now has a new home - a lego case. I tried to convince my 7 year old son to build it, but he felt playing minecraft and ace of spaces on the computer was more important, so I rummaged through his lego collection and constructed what you see below. 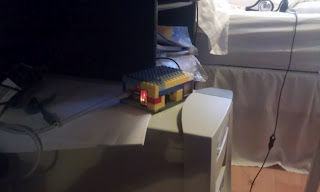 OK, so it's not going to win any prizes, but it does have windows. No, not microsoft windows, but windows through which you can see its LEDs. Just look at the cosy glow from its rear window. (I've decided that the ethernet cable gets plugged up its arse and its power goes in its mouth.)


I've also installed a new operating system, the beta of Debian wheezy for the RPi, and it seems to work just fine. I've fed back one minor problem I had (to do with he config tool) to the developer via github and I hope to contribute a bit more in the future.

My next task was to set up ssh access, which was easily done with this command:

and to make sure this happens after every boot, I issued this command:

Of course, this isn't much use if you don't know the IP number, so to set a static IP I just had to edit /etc/network.interfaces to read:

When I'm ssh'ing into it, I don't type in 192.168.1.23 every time, instead I gave this IP the identity of "summerston" on my other computers (editing /etc/hosts on linux) in keeping with my policy of naming my computers after defunct Glasgow train stations (Summerston train station is actually open, but the original station from which it gets its name, but which was several miles away, has been closed for about forty years).

The last thing I set up was a VNC server so I could access the GUI desktop from my laptop, this was just two commands. The first installed the necessary software:

and the second started the server:

I was then able to access the desktop from my laptop using KDE's VNC client called KRDC and also my phone using a VNC app. It looked just like this: 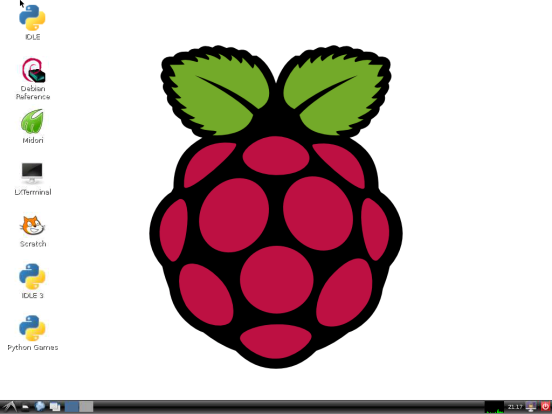